SDAC engages with the private sector on the problem of plastic 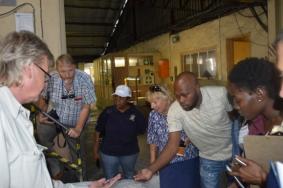 In view of the ongoing high level discussions on the banning of plastic bags and increasing public awareness campaigns on the matter, the SDAC engaged with Plastic Packaging cc on 24th March 2017.

The engagement involved a tour of the recycling plant and operations of Plastic Packaging cc in Okahandja and an exchange on the problem of plastic and how it can be best resolved in Namibia.

Managing Director of Plastic Packaging cc, Mr. Jaco Venter, emphasised the need to find common ground and objectives between Government, civil society and the private sector with regard to the introduction of measures to reduce the presence of plastic in the Namibian environment.

As a leading employer and home-grown company, Plastic Packaging cc has recently been vocal regarding initiatives and discussions which have given momentum towards the possibility of banning plastic bags in Namibia. These included a discussion in the National Assembly on the topic in September 2016 as well as the launch of a “Zero Plastic” campaign in December 2016 aiming towards the banning of non-biodegradable material for the protection of the environment through a group involving the Chairperson of the Parliamentary Standing Committee on Natural Resources, the Namibian Chamber of Environment and Ms. Earth Namibia.

During the meeting, common ground moving forward was identified including:

Mr. Venter expressed his desire for the Council members to see the company’s facility in Windhoek and also recommended for the members to view the recently opened Waste to Energy facility at Rent-A-Drum in Windhoek.